I knew almost nothing of Cowboy Bebop until January of this year (2019). The series recently celebrated its twentieth anniversary, it was revealed Netflix is making a live action adaptation. Friends of mine had already urged me to give the series a try previously, so my curiosity was piqued, and I felt it was the time to finally watch this show.

After finishing Cowboy Bebop, I felt the immediate urge to recommend this show to everyone. So this is not exactly a review that may or may hint at the plot or premise, and is an extended explanation as to why it is worth the time.

My goal before I started the show was to watch at least one episode per day as to not binge. The episodes are 22-24 minutes long apiece, and I felt that a whole day would give each episode it’s due and time to sink in. My watching experience revealed I had underestimated how much time I would need to process some of them. 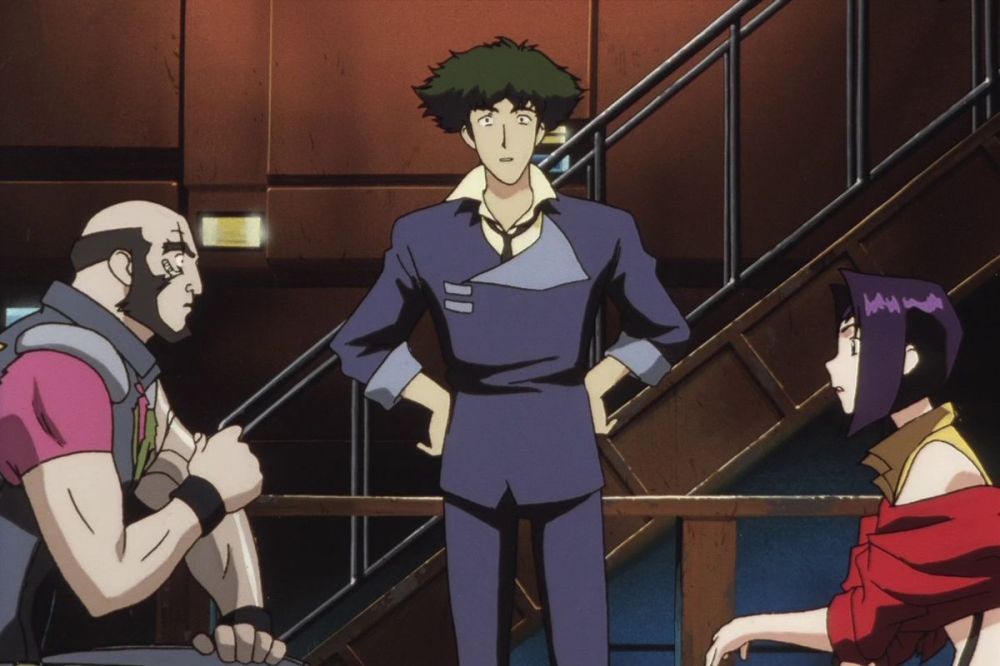 Each episode features our crew of bounty hunters in Spike Spiegel, Jet Black, and Faye Valentine aboard the spaceship Bebop. The show is set in our universe, taking place in the year 2071, with our leads journeying among the stars, trying to get by in the cold vacuum of space by cash-in in on wanted criminals. The color palette, jazz-influenced score, and deceptively simple animation are dripping with style, which all serves to compliment the futuristic yet grounded tone.

Given the show is set in not so distant future, it sometimes feel like a precursor to the kind of characters that intrigue modern audiences: complex, extremely relatable, and realistic. At first the characters fit into distinct, familiar archetypes so audiences can understand them on a familiar level. However, the first three episodes hint that these archetypes and expectations will be slowly eroded through the series to reveal the flawed, multidimensional characters underneath.

Unlike the shows of today, however, Cowboy Bebop is disciplined with character exploration and adheres to a primarily episodic form of storytelling. Each episode can be generally defined by a genre or theme. These include noir, westerns, science fiction, and horror. Sometimes these may blend to make intriguing combinations due to the similarities and contrasts between the genres. This episodic discipline helps bring out the best in character dynamics while simultaneously allowing each episode to be inviting to even the uninitiated viewer. There are of course a few threads that follow through the show, but these are often faint and never overtake the isolated stories, existing mostly the give the show a beginning and end.

All of these elements tied together took my breath away and left me in a state of amazement that an episodic story like this could be so beautiful. My recommendation for Cowboy Bebop is not based in hype or its influences on our culture in the last twenty years. This show acknowledges emotions and struggles and sympathizes with us, which differentiate it from shows like Black Mirror and The Twilight Zone. Cowboy Bebop exists to help us process all of the harder questions that life brings, allowing us to find our own answers.

I recommend Cowboy Bebop, I adore Cowboy Bebop, because it reminds us we are ultimately our choices, and why the most powerful choices we can make are the ones in which we most believe. Please, take the time to check it out for yourself. Did I mention this show also features a corgi?

View all posts by louwilk66