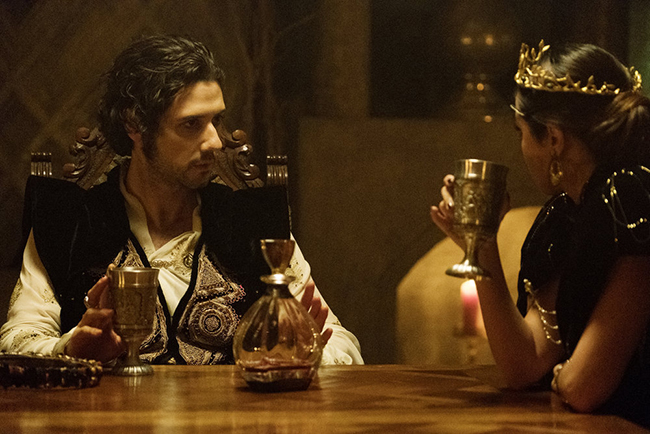 When it comes to brunch, poached is exactly how I like my eggs – but this week’s episode of The Magicians, “Poached Eggs” didn’t work for me.

Last week was disjointed, and the theme continued into this week with this set-up episode. Julia and Alice confront and solve the problems they created last week with the magic transfer. I like that the writers are building this relationship, but it feels so fragmented in these types of episodes.

A relationship I’m not thrilled about is Poppy and Quentin. Sure, he needs to get over Alice, but he’s expressed discomfort with her in the two episodes she’s appeared. It will be a rebound and definitely a mistake for Quentin, but even this tangent from the integral plot of the show bothers me. Cut to the good stuff!

Margo and Elliot also tied up quite a few loose ends in Filory and seamlessly traveled from Earth and back throughout the episode. Margo’s realization that the fairies were growing an army had such a poor execution in “Poached Eggs.” How can you expect me to believe that Margo grabbed the only fairy eggs in that entire mushroom field? Or that the fairy queen cares about five eggs? It all seems off.

I did like that we got a resolution to the Fray situation. I like Elliot’s relationship with Fen a lot, and this conflict brought that back into focus. I hope Fray shows up again because while she was a cliché, I found her wildly entertaining.

Quentin, Poppy, and Penny go on a mission to break Katie out of the psych ward. These few scenes in the psych ward felt like a combination of the bank heist, and when Q loses his mind. Poppy added some extra flair and saved the day, but I’m waiting for Poppy’s twist. Every character on The Magicians is some sort of trope but usually with a surprising twist, and if Poppy is going to be around for longer than two episodes I’m expecting more than just another quirky woman.

It’s hard for me to have any strong positive feelings about this episode when it was just a rehash of the earlier episodes. Katie and Penny had the same fight about their cursed relationship, Alice was reckless in an effort to preserve magic, Quentin was existential, and an angry mob attacks Margo and Elliot. The usual.

Wait…that last one was a little unusual. I don’t understand the last conversation they had with the fairy queen, but I hope we learn more about it next week.

I’m particularly excited for next week’s episode because it appears to have a short story set up, which can be fun in ensemble shows like The Magicians. Here’s hoping next week can redeem these last two weeks of so-so magic.