Insignificant Events in the Life of a Cactus by Dusti Bowling (Sterling Children’s Books, 2017)

Insignificant Events in the Life of a Cactus is a middle grade novel for ages 8-12 about Aven, a 13 year old girl born without arms who just moved from Kansas to Arizona. Her parents take over managing Stagecoach Pass, a Western theme park Aven describes as less Disney World and more Disney Shanty Town, while Aven starts at the local middle school. At her old school, she had been with the same kids since kindergarten, so her disability had stopped being such a novelty, and she had a group of friends she adored. At her new school, things aren’t so great. 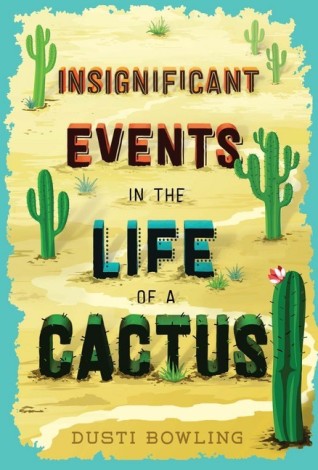 Aven avoids lunches because she doesn’t want the other kids staring at her while she eats with her feet, which leads her to meeting two new friends:  Connor, who hides in the library because he’s embarrassed by his Tourette syndrome’s tics, and Zion, who eats outside because “[e]veryone likes to watch a fat guy eat.” Together (with considerable dragging from Aven, who admits to watching too much Scooby Doo) they try to solve the mystery of Stagecoach Pass, mainly what happened to the mysterious owner who never comes to the park.

Honestly, the mystery is sort of boring, to the point that Connor and Zion aren’t too interested in it. Aven just really likes drama, as evidenced by her penchant for story telling and pranks, especially related to her armless-ness. There’s not much to the mystery — they just look through an old shed a lot and sometimes find things that might be cool. And the ending is fairly obvious.

This is really a story about friendship and disabilities. It has all the sap you want in a good friendship story:  they all start off friendless, find each other and bond first over their mutual loneliness before progressing to other things (like video games), experience a fight and make up, and start to expand their world beyond each other to more friends at school.

Where this book really shined for me was in the disabilities. I cannot speak to the accuracy of either disability portrayal, as I do not have Tourette’s or no arms. But I loved the little touches that spoke true to me:  Aven’s relief over accommodations like automatic soap dispensers and sinks so she could wash her feet, her frustration over people using the handicapped stall who didn’t (at least through her eyes) need it, Connor’s fear of getting worse when he meets someone with a more severe form of Tourette’s, and Aven’s pleasure in letting the boys handle money for her because her mom wasn’t around to make her do it for herself, to name a few. This didn’t read like a book to inspire people who don’t have disabilities; it read like a book about two kids who have disabilities.

The contrast of Aven and Connor’s acceptances of their disabilities blew me away. Aven and Connor represent two ends of the spectrum. Aven doesn’t accept that she has a disability, but she also doesn’t let having a disability hold her back from anything. When her parents adopted her, she had been living in foster care where someone did everything for her. Her parents immediately put an end to that and taught her how to navigate the world on her own, even if it meant spending hours in the grocery store while she put everything in the cart without help. She attacks the world with a fearlessness that makes her reject the very idea of being disabled, because to her, disabled and unable are the same thing.

Connor, on the other hand, knows he is disabled. He doesn’t have the functionality that Aven has: he can’t go out in public, he views himself as the cause of his broken family, and he can’t imagine a desirable future for himself with his disability. Aven sees no boundaries to her world; Connor sees nothing but boundaries in his. Aven’s life is full of laughter and jokes about her disability; Connor’s is full of loss, embarrassment, and shame due to his. As a disabled person, I loved that both were shown and neither were chosen as “right”: both are legitimate and experienced by people every day. I especially enjoyed the faux pas they made when first talking to each other about their disabilities and the overall narrative of learning to interact with someone with a disability, as someone with a disability. More than anything, I loved this book for being about a friendship between two kids with disabilities learning from each other.

Insignificant Events in the Life of a Cactus raises the bar for middle grade novels about characters with disabilities, because it is not just about bursting the bubble between “us” and “other” for the disabled character and the abled world. It never presupposes those boundaries to begin with. It’s a story about what life, friendships, and fun look like for different kids with different problems, including disabilities, families, money, and moving. Lackluster plot aside, Aven and Connor make this book a joyful and funny read I won’t be forgetting any time soon.

View all posts by overthinkingsarah