Welcome to 13 Writes of Fright, where The Overthinkers count down to Halloween with our favorite books, movies, and TV shows. We hope you learn about some new spooky flick, or remember a really great Halloween special. Share this series using #13writesoffright!

While Train to Busan is not directly connected to Halloween it still has a major element of Halloween: ZOMBIES! I already love the zombie genre intensely, and I have high expectations, so here’s a brief review of Train to Busan and why I thought it was an amazing film overall. (Spoilers ahead).

I assumed that Train to Busan might avoid the first zombie kill for a little while, and I hunkered down to clock the time it happened, but I was so wrong. Within the first few minutes a truck driver hits and kills a deer, and BAM, that deer got right back up. So many zombie movies can’t help but make disappointing zombie animals, but that deer was enough to set the tone for me. Train to Busan wasn’t going to be subtle, but it would be scary. From zombie close ups, to jump scares, it did not disappoint.

Train to Busan focused on a full time businessman, part time horrible father, Seok-woo, and his daughter, Su-an. He’s the trope, and it works for the set up of the movie. As soon as they arrived at the Seoul train station we know something is up.

Throughout the beginning of the movie we meet our core characters: a horrible old man, Yong-suk; a cute baseball team couple, Jin-hee and Yong-guk; my favorite married couple, Seong-kyeong, who is pregnant, and her husband, Sang-hwa. 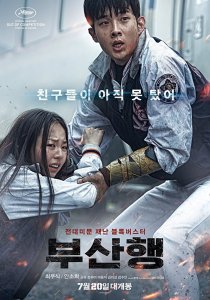 I felt for the characters in a major way, and not just adorable Su-an. I was fighting for the married couple the whole time! They didn’t seem like they would work together, but they fought so hard to survive. All of the characters are built on tropes, but manage to remain authentic.

I loved how the epidemic began on the train, one single terrified woman seeking safety. So naturally that woman killed another, and so on. What didn’t make sense to me is how no one saw her, or even tried to help her. I know people are on their phones, but wow! talk about phone addiction, guys.

The pacing of Train to Busan was excellent. Suspense built from the moment they entered the train. There were fewer moments in Train to Busan where I had to suspend disbelief.

In one scene the zombies pulled a World War Z and piled on top of one another. I am not a fan of that type of zombie, so I’m glad that wasn’t a constant device in the movie. I kept screaming for Seok-Woo to run but then I remembered that they were on a train, where were they going to go? And then the most clever thing I have ever seen happened in this film. They get to safety in one end of the train, and determine that the zombies only respond to seeing their prey. Seong-kyeong throws water on the glass doors and pastes newspaper to it. The zombies relax and they are truly safe. 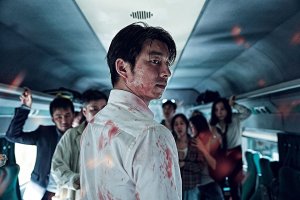 Train to Busan also introduces a new zombie trait. While humans turn, their personalities change, too. Seok-Woo’s mother spent her final words cussing her daughter-in-law, despite never expressing those feelings when we met her. After seeing several other humans turn, I think the film implied that whatever last emotion the humans had would turn into an extreme. Seok-Woo’s mother felt regret which turned into aggression; Yong-suk felt fear, and he was a very slow turning zombie; and Seok-Woo felt happiness in remembering his daughter. I think this was a neat twist on the zombie transition. It wasn’t passive, but an active and terrifying death.

I loved the moral compass of this story. Su-an was already convinced her father was a selfish man, and the apocalypse only reinforced that theory. He scolded her for helping others and told her that she should only care for herself. Eventually, Seok-Woo has to team up with other people to survive, and must learn to rely on people other than himself. 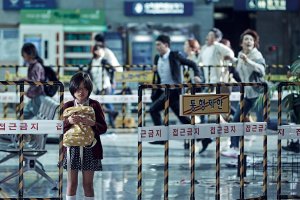 In my opinion, the best sequence was the Daejeon Station horde. Everything about that scene had me screaming at my TV. It was just so well done, I don’t know what else to say about it. I also loved when Seok-woo, Sang-hwa, and Yong-guk teamed up to get from the ninth car to the thirteenth car.

The revelation that the zombies cannot see in the dark when the train passes through tunnels was fun, but used excessively. I have never travelled on KTX through South Korea, but are the tunnels really that long, guys? I just can’t believe it. 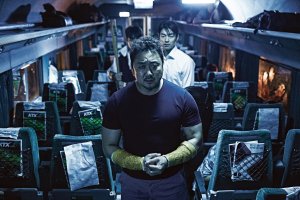 I also counted the first obvious zombie kill at 47 minutes in, but psych! it wasn’t dead just yet, and managed to bite my favorite Sang-hwa on the hand! Not cool!

The ending of this movie is what The Walking Dead should be doing with it’s characters. Hey, they’ve made it this far, but too bad, they’re not going to make it. Sometimes even the worst characters make it to the end, and it forces you to think about what it takes to survive. Are you capable of pure selfishness?

In my experience, Korean movies do not pull punches. Snowpiercer and The Handmaiden kept me on my toes the entire time. I’ve heard amazing things about Old Boy, and after Train to Busan I have high expectations for all Korean films. 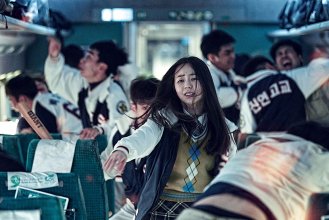