I saw Kingsman: The Golden Circle and I desperately wanted to love it, but I couldn’t. Obviously, there are spoilers from here on out. You’ve been warned!

The charm of the first Kingsman was authentic. I loved the rags to riches story, and Taron Egerton is an excellent millennial foil to James Bond. Let’s not forget the powerhouse performances from Colin Firth and Sam Jackson.

So who could expect the sequel to be just as good? Well, me. I had such high hopes! Unfortunately, no matter how twisted they made Julianne Moore’s Poppy, I doubt it would have been as believable as Valentine.

I also disliked how Golden Circle was advertised. The ads clearly show Colin Firth’s character back up and running, which spoils the fact that he’s still alive, and that he will eventually regain his memories. The trailers also play up Channing Tatum’s role in the movie, which was extremely limited. If you’re going to see Golden Circle for Tatum, don’t waste your time!

In the original Kingsman, the women were awesome. Roxy was a solid female character who was never sexualized or turned into a romantic interest for Eggsy. Gazelle was an incredible villain, and disabled, too. She may be one of my favorite villains in modern cinema. Sure, Eggsy saves his mom from an abusive husband, but it’s a quick nod to the damsel in distress role and nothing more. 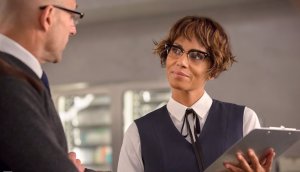 However, the writers consistently mistreat women in The Golden Circle. Once again, Eggsy has to save Tilde from the end of the world. How hard would it have been to incorporate her into some cool mission? I think Eggsy and Tilde would be a power couple who support each other in every way, royal function or awesome action sequence.

Poppy is played up as a crazy woman who makes men eat their friends. I think they even tried to make her a vegan at the end, I guess sealing the deal that she was truly “insane.” I’m not sure what the writers wanted to accomplish with Poppy, but she came off fairly one dimensional.

Then there’s Ginger, who talks about action but never gets a chance to enter the ring. It’s not as if they were lacking a budget for fight scenes, get that woman in there!

Don’t even get me started on Clara, the girlfriend of an enemy, who Eggsy manipulates into bed. Do I need to mention the weird sex scene in graphic detail? The movie sure did! How unnecessary. We get what the tracking device does, we don’t need a lesson in anatomy. Later, her boyfriend blows her up as punishment for sleeping with Eggsy. What a great message for men and women everywhere! Ugh.

There was one decently written woman in The Golden Circle, Fox, the president’s chief of staff. While Fox’s sub plot was very on the nose, she felt like an honest representation of the working woman. She even impeaches the president for his crimes. Awesome, but it’s still not enough to even out the other three.

Golden Circle calls upon your nostalgia of the first movie. The only problem is that there hasn’t been enough time to develop real nostalgia. In the end, the fight scenes that called back to the first movie were misplaced, and felt like an exact copy.

I also disliked that The Golden Circle destroyed the entire Kingsman enterprise in a blink of an eye, just so it could introduce the Statesman. I definitely won’t have any nostalgia for Statesman.

I hope everyone learns a lesson here: you can’t make an anti-James Bond movie and then destroy the entire organization in a cash grab. Let’s not and say we did make this movie. It just missed all of the marks for me!